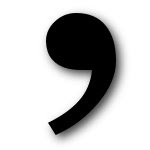 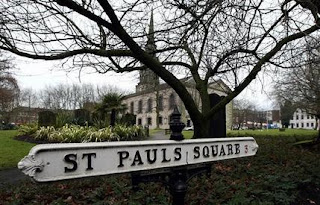 A street sign naming St. Paul's Square without an apostrophe is seen in Birmingham, England, Thursday Jan. 29, 2009. An English local government has decided to stop using apostrophes in its street signs, saying they are confusing, old fashioned and interfere with modern GPS systems. Britain's self appointed guardians of the English language are outraged. (AP Photo/David Jones, PA)
മലയാള ഭാഷയിലും ഇതു പോലെ ചില പരിഷ്ക്കാരങ്ങള്‍ വരുത്തണം. നമുക്കിവിടെ അപ്പോസ്ട്രോഫിയുടെ പ്രശ്നമില്ല. പക്ഷെ പടി കടത്തേണ്ട കുറെ അക്ഷരങ്ങള്‍ ഉണ്ട്. അവയെ ഉടനെ കൈകാര്യം ചെയ്യണം.
മീര സെല്‍വയുടെ രസകരമായ ലേഖനം
Its a catastrophe for the apostrophe in Britain
By MEERA SELVA – 31 Jan 2009
LONDON (AP) — On the streets of Birmingham, the queen's English is now the queens English.
England's second-largest city has decided to drop apostrophes from all its street signs, saying they're confusing and old-fashioned.
But some purists are downright possessive about the punctuation mark.
It seems that Birmingham officials have been taking a hammer to grammar for years, quietly dropping apostrophes from street signs since the 1950s. Through the decades, residents have frequently launched spirited campaigns to restore the missing punctuation to signs denoting such places as "St. Pauls Square" or "Acocks Green."
This week, the council made it official, saying it was banning the punctuation mark from signs in a bid to end the dispute once and for all.
Councilor Martin Mullaney, who heads the city's transport scrutiny committee, said he decided to act after yet another interminable debate into whether "Kings Heath," a Birmingham suburb, should be rewritten with an apostrophe.
"I had to make a final decision on this," he said Friday. "We keep debating apostrophes in meetings and we have other things to do."
Mullaney hopes to stop public campaigns to restore the apostrophe that would tell passers-by that "Kings Heath" was once owned by the monarchy.
"Apostrophes denote possessions that are no longer accurate, and are not needed," he said. "More importantly, they confuse people. If I want to go to a restaurant, I don't want to have an A-level (high school diploma) in English to find it."
But grammarians say apostrophes enrich the English language.
"They are such sweet-looking things that play a crucial role in the English language," said Marie Clair of the Plain English Society, which campaigns for the use of simple English. "It's always worth taking the effort to understand them, instead of ignoring them."
Mullaney claimed apostrophes confuse GPS units, including those used by emergency services. But Jenny Hodge, a spokeswoman for satellite navigation equipment manufacturer TomTom, said most users of their systems navigate through Britain's sometime confusing streets by entering a postal code rather than a street address.
She said that if someone preferred to use a street name — with or without an apostrophe — punctuation wouldn't be an issue. By the time the first few letters of the street were entered, a list of matching choices would pop up and the user would choose the destination.
A test by The Associated Press backed this up. In a search for London street St. Mary's Road, the name popped up before the apostrophe had to be entered.
There is no national body responsible for regulating place names in Britain. Its main mapping agency, Ordnance Survey, which provides data for emergency services, takes its information from local governments and each one is free to decide how it uses punctuation.
"If councils decide to add or drop an apostrophe to a place name, we just update our data," said Ordnance Survey spokesman Paul Beauchamp. "We've never heard of any confusion arising from their existence."
To sticklers, a missing or misplaced apostrophe can be a major offense.
British grammarians have railed for decades against storekeepers' signs advertising the sale of "apple's and pear's," or pubs offering "chip's and pea's."
In her best-selling book "Eats, Shoots and Leaves," Lynne Truss recorded her fury at the title of the Hugh Grant-Sandra Bullock comedy "Two Weeks Notice," insisting it should be "Two Weeks' Notice."
"Those spineless types who talk about abolishing the apostrophe are missing the point, and the pun is very much intended," she wrote.